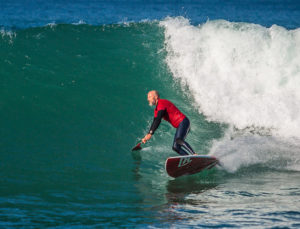 Dirk started to SUP in 2008. As a wave windsurfer by heart since more than 30 years it didn`t take him long to enjoy SUP Surfing too.

Based in Hamburg/ Germany he surfs the windswept lines around Klitmøller / Denmark – or better known as „Cold Hawaii“. In 2013 he became German Vice SUP Wave champion, but leaves now the competitive part of the family to his daughter Paulina, a multiple German champion and number 4 at the European wave SUP championships in 2017. He loves to share his passion for SUP Surfing technique, gear and the ocean in general with all his guests at the camps in Denmark, Portugal – or now in Chicama, Peru.